Matt Canaga moved to Loveland, CO in 1994 and has called Northern Colorado home ever since. He attended Thompson Valley High School and graduated early so he could serve his country by enlisting in the United States Marine Corps at the age of 17. During his enlistment in the Marines, Matt deployed twice to Iraq in support of Operation Iraqi Freedom and once as a part of a Marine Expeditionary Unit to Okinawa, Japan. During heavy fighting in the city of Ramadi, Matt was wounded by a hand grenade which was thrown at him during a firefight. Matt earned two meritorious promotions before eventually being promoted to Sergeant; finishing his enlistment as an Infantry Squad Leader. 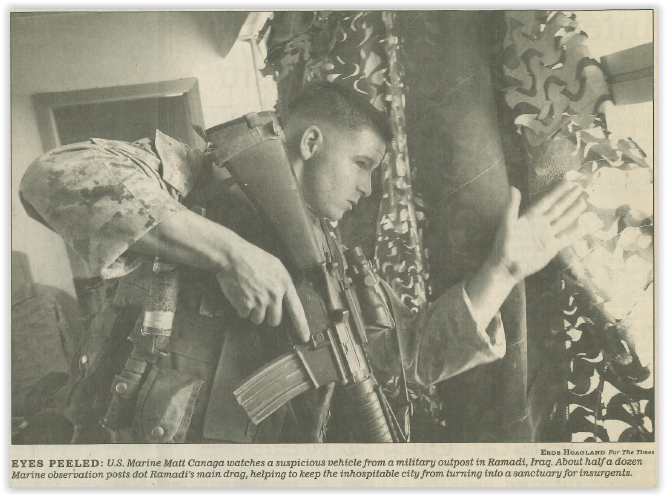 After completing his enlistment, Matt returned home to Loveland to start his new life as a civilian with his amazing wife Christy. A desire to serve his community compelled Matt to seek opportunities in the criminal justice field. Dr. Patrick Allen, long-time Larimer County Coroner, took a chance on Matt and hired him to be a Medicolegal Death Investigator. Matt attended a Peace Officer Academy and obtained his Bachelor’s Degree in Criminal Justice. Over the next 13 years, Matt served the families of Larimer County as a Death Investigator and Autopsy Technician.

Matt worked a grueling on-call schedule throughout those years because he deeply believed in the mission and purpose of the office. He wanted to care for those who are suffering through deep personal loss. Matt worked hard to bring closure to grieving families by giving a voice to their loved ones through a thorough death investigation. Matt and Christy built a family during these years, with Christy homeschooling their three wonderful children.

Matt has sought out challenging opportunities within the Larimer County Coroner's Office including becoming the office representative on the Child Fatality Review Board for many years. As an Investigator, Matt Canaga was eventually certified through the Colorado Coroner's Association and the American Board of Medicolegal Death Investigators. Throughout his career, Matt has built training materials for local law enforcement agencies and routinely provides instruction on death investigation techniques at both a local and state level. Understanding the need for self-improvement, Matt consistently pushes himself through continuing education and certification opportunities.

In 2020, Larimer County Coroner Dr. James A. Wilkerson IV, selected Matt Canaga to be his Chief Deputy Coroner and asked Matt to lead the office with his form of servant leadership. Since 2020, Matt has focused on innovating and streamlining dozens of aspects of the death investigation process. Matt has an intimate knowledge of the inner-workings of the Larimer County Coroner's Office due to his Chief Deputy experience specifically pertaining to budgeting, hiring, training, scene supervision, project management, organizational leadership, and administrative tasking. As Chief Deputy Coroner, Matt supervises the daily operation of the office and a staff of 18 and is responsible for a budget of over 2 million dollars.

As Larimer County Coroner, Matt Canaga will continue his long history of compassionately serving bereaved families by faithfully seeking the truth and equipping the staff.